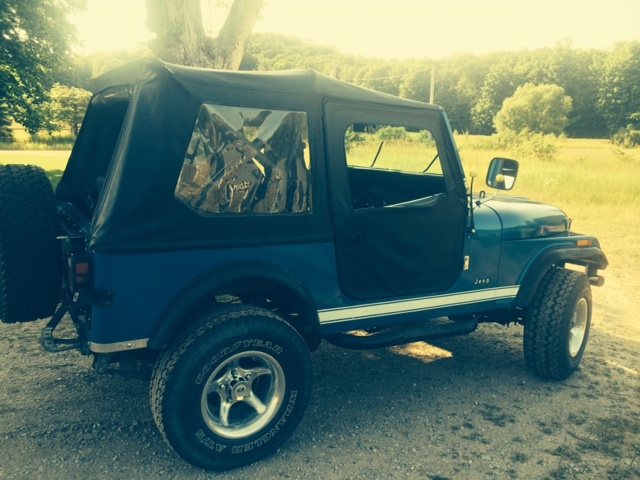 Get a whiff of this

Its coming up on a year since Jacob died, he would have turned 23 on March 3rd. I had 22 years of opportunity to influence his life for good and now I live with only the memories of what I did right or wrong. Do I wish I could change some things? Certainly. Do I live with regret? Sometimes. Was I an ideal father? No. Is my conscience clear? Absolutely. I was not perfect, I made allot of mistakes but I was honest with him about my failures and he was always willing to forgive me of them. I could have done better but I did the best I could.

What matters most to me when I think of the influence I had in Jacob’s life? The answer to that question may shock some people, but before I answer that question let me digress for a moment and share something else with you.

Stacey and I love open air joy rides, we used to do it on a Harley but now we do it in a 1985 Jeep CJ7. Cruising with the top down in early summer is awesome! We enjoy the sun, the sights and the smells of spring. The warmth on our faces and the beauty of northern Michigan’s lakeshore, rolling hills and the sweet fragrances of lilacs along with the overwhelming aroma of the orchards with their apple and cherry blossoms. But occasionally we drive past a rotting deer carcass, a pig farm or a skunk who lost a standoff with an SUV. The fragrance of spring can be quickly replaced by the worst of smells. We naturally prefer the sweet smells but in reality we are confronted by both. My life was an influential fragrance to Jacob and my life is an influential fragrance to you as well if you have taken time to read any of my posts. What do I mean? Continue reading and let Paul explain.

Paul writes, “Now thanks be to God who always leads us in triumph in Christ, and through us diffuses the fragrance of his knowledge in every place.” The apostle is thankful and encouraged that God was using him to bring the smell of Jesus to the lives of everyone in every place he went. But incredibly this influencing aroma rose above and beyond the nostrils of men to the very presence of God in heaven bringing pleasure to him. Paul continues by saying, “For we are to God the fragrance of Christ among those who are being saved and among those who are perishing.” God is pleased when the knowledge of Christ is diffused by his children. But sadly, when the sweet aroma of eternal life in Christ is rejected it becomes the bitter smell of the death and judgment on those who reject it. He adds, ” To one we are the aroma of death to death, and to the other the aroma of life unto life. ” (2 Corinthians 2:14-16) The gospel rejected reeks of death but the gospel received is the fragrance of eternal life. God is glorified in his grace and mercy as well as in his holiness, justice and wrath.

As a father did I diffuse the fragrance of the knowledge of Jesus to my son Jacob? Yes, as best I knew how I did; my conscience is clear in this matter. This is all that matters to me in the sphere of influence that I had in his life, and in yours as well. Why? Because a soul is priceless and when death comes to take a soul into its eternal home what matters most is what you did with Jesus of Nazareth who is raised from the dead. As Christian’s we are to smell of Jesus, we diffuse his aroma by sharing with people the good news of eternal life that is found in him alone. When we spend time with Jesus we will have his aroma and people around us will get a whiff of his sweetness wherever we go. As we do this, the aroma of the Son of God rises to the heavens and reaches the nostrils of the Father, and in this God is well pleased. We smell of life to those who believe and of death to those who do not.

Be encouraged believer! Your in a victory parade and Jesus is leading the way. Be faithful in sharing Jesus, be encouraged when people enjoy the sweet smells and don’t be discouraged when they think you stink. Why? Because God is pleased with you every time you share the gospel of his Son in your circles of influence. This is the most influential thing we do, this is what matters most because it has eternal, not temporal significance and reward.